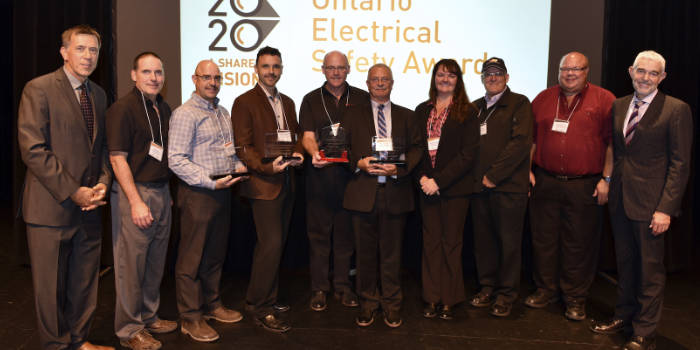 MISSISSAUGA, ON (Sept. 29, 2017) – Yesterday, the Electrical Safety Authority (ESA) held its Annual Meeting and Ontario Electrical Safety Awards to celebrate achievements in electrical safety. The award recipients – a municipality, utility, manufacturing and automotive companies, and a fire chief – illustrated that electrical safety is a shared responsibility that touches all individuals and organizations across the province.

The Awards were presented by Brian Bentz, Chair, Electrical Safety Authority Board of Directors, and Kevin French, Deputy Minister of Government and Consumer Services in the categories of Worker Safety, Consumer and Home Safety and Powerline Safety. This year Scott Saint, ESA’s Chief Public Safety Officer, gave special recognition to Honda of Canada for its long-term commitment to improving electrical safety for its workers and facility visitors.

The 2017 award recipients are:

Worker Safety: CF Industries, Courtright – for its commitment to keeping workers safe by installing Infrared Scanning windows on all electrical equipment. The scanners perform required routine maintenance on electrical equipment, which eliminates exposure to arc and shock hazards and helps to ensure a safer work environment for employees.

Powerline Safety: The Corporation of the City of Timmins – for identifying a safety risk with its snow removal dump trucks and taking action to reduce the risk of powerline contact. The City of Timmins has installed box buzzers on all city-owned dump trucks, and contractors hired for snow removal are required to have a box buzzer system in their trucks. A box buzzer alerts a dump truck driver when the box on the truck is raised and continues to sound until the box is fully lowered. This feature reduces the risk of a raised box contacting a powerline.

Chief Public Safety Officer’s Special Recognition Award: Honda of Canada – for its long standing commitment to workplace safety in its Alliston, Ontario facility including the implementation of the Z462 Workplace Standard. Honda of Canada is focused on continuous improvement and the company’s commitment to safety has been embraced by employees and contract personnel who work in the plant. All employees are expected to follow the safety protocols and continually work to maintain the safety standards that have been established.

ESA also presented an Honourable Mention distinction to a well-deserving safety partner: Fire Chief Brian Wilson, Clarence-Rockland Fire, for his efforts to ensure homeowners received important flood safety information as they faced the potential for many electrical hazards as a result of the severe flooding that occurred in the region in May 2017.

The Ontario Electrical Safety Awards were established in 2010 to formally recognize the important contributions of individuals and organizations toward achieving ESA’s vision of an Ontario where people can live, work and play safe from electrical harm.